In many industry applications, it is often the case that solids materials are mixed with liquid. For instance in water well drilling process there is a lot of slurry. Dumping will contaminate environment and waste a lot of water, and it may damage landscape. Under this circumstance, decanter centrifuge will play a very important role to separate solids from liquid. Without decanter centrifuge, solids/liquid separation will become low efficient, high cost and waste of liquid because of low separation efficiencies in other means of separation.

The mostly commonly used decanter centrifuge horizontal type. They work under the principle of gravitational separation. Let us take an example. If you fill a container with mud and liquid. The weight of the mud will cause it to settle down to the bottom of the container. The aggregation of the solids on the base of the container will force liquid to stay on top of the solids, generating a obvious barrier between solids and liquid. The longer the mud is undisturbed in the container, the clearer the liquid is.

Rotational separation can be found in many area, from amusement parks to country county ground. Rotating horizontally gives you a force to overcome gravitational force from the earth. Decanter centrifuge works the same way, except that the rotation can be vertical, causing solids to move in radial direction, not in horizontal direction as we see in amusement park. The other thing is that decanter centrifuge rotates in much higher RPM, usually in a few hundreds RPM. Small centrifuges can run at the speed of over 10,000 RPM. 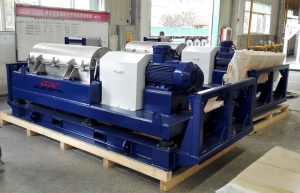 A reliable solution for solid-liquid separation

Traditionally such separation is done by static setting – mixture of liquid and solids are sent to a container, or a specially designed tank with mechanism inside the tank with the intention to speed up the setting process.

The advantage of such static setting is low cost, as the tank and the associated transferring equipment is all what is needed.

The disadvantage is its low efficiency, as the deposition process is described by Stock’s law. The smaller the difference between the specific gravity of the two phases, the longer time it takes. Sometimes it takes so long that such process makes no sense.

In order to solve this problem, many efforts have been made. The decanter centrifuge by GN Solids Control is a very efficient solution.

Working under the principle of centrifugal force, the decanter centrifuge by GN Solids Control rotates the material inside the spinning bowl at the speed of up to 4500RPM. Generated G force can be up to 3000G. In other word it is 3000 times more efficient than static setting process, if G force is used as the comparison criteria.

Under such separation force, solids is quickly thrown to the surface of the bowl and liquid is floated on top of the set solids. A specially designed decanter inside the rotating bowl, a specially shaped screw conveyor, will send set solids to one side of the bowl and discharge solids through Tungsten Carbide enforced opening. Separated liquid will be discharged from the other end of bowl called weir whose height is adjustable.

A unique features of GN decanter is how the bowl is built. It is centrifugally casted with 2304 stainless steel, which results in pretty evenly distributed density throughout the bowl. This is crucial to the normal operation of the decanter centrifuge because of the very high G force. For instance, 1 gram of out of balance weight can be as big as 3000 gram at the highest rotation speed. Centrifugal casting greatly reduced the potential of out of balance, though it is much more expensive to cast the bowl.

GN Solids Control horizontal screw centrifuge is used for alumina dehydration treatment on site. The horizontal screw centrifuge has achieved good results through on-site processing. On-site customers have given positive evaluation and high recognition. GN Solids Control special centrifuge technology service The team assembled and commissioned the service on the spot. The professionalism and excellent technical support of our after-sales service personnel impressed the customers and achieved very good results in the dehydration treatment of alumina.

The concentration of alumina sludge before treatment in the on-site use of the horizontal screw centrifuge produced by GN Solids Control is between 8% and 10%. The on-site customer requires the sludge concentration after dewatering to reach 60% to 80%. Containing alumina (fine particle) water and sodium nitrate dissolved in water, Guanneng’s decanter centrifuge can meet the customer’s alumina sludge dewatering requirements. According to the customer’s processing requirements, we can choose different sizes of snail centrifuge. machine. The various types of horizontal screw centrifuges produced by GN Solids Control are mainly used for recovering barite, separating sewage, separating fine solids, reducing the solid content of materials, effectively controlling the density and viscosity of on-site drilling fluid, and ensuring customer drilling fluid. Performance. The straight section and the taper section of the horizontal screw centrifuge are made of 2304 bidirectional stainless steel and are cast by centrifugation. The rest of the drum assembly is made of SS304 stainless steel. The centrifuge auger is protected by wear-resistant alloy sheet for easy maintenance and replacement. . The centrifuge bearing adopts the original imported SKF bearing to improve the stability of the equipment and the service life of the bearing. The design team of Guanneng Centrifuge has accumulated a lot of practical experience in the field, and developed a batch of multi-purpose, which can adapt to various environments and different specifications. High-speed, medium-speed, low-speed and variable frequency centrifuge products have been well received by customers after being put on the market. 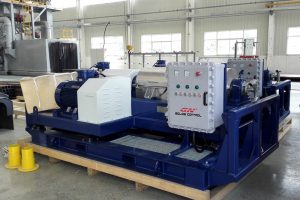 GN Solids Control is one of the largest solids control and waste management companies specializing in the production of related equipment such as shale shakers, desanders, desilters, mud cleaners, vacuum degassers, mud gas separators, sedimentation centrifuges Machine, agitator, centrifugal pump, cutting dryer, screw pump, shear pump, mud gun, etc. After 10 years of development, GN has promoted its products to more than 60 countries and now has two overseas subsidiaries in the US and Russia.

Recently, we forced our key staff to push our Decant centrifuges to the North American market. So far, we have received a lot of good feedback from different end users in the US and Canada. Our decanter centrifuge system is suitable for many different environments. They can work in a super hot desert environment. The VFD control system is provided by SIEMENS or ABB. All bearings used in the centrifuge are made of SFK quality bearings to ensure longer life and more reliable operation. All motors and control panels are explosion-proof and certified for use in Zone 1 and Zone 2 hazardous areas. The 553 decanter centrifuge will be a star product for handling large volumes of liquid and solids separation work. More and more customers are showing great interest in this. Also for many different industries, they also chose our decanter centrifuge as the first choice for solids separation. Now GN can not only manufacture the traditional 363 centrifuge with a 14-inch bowl, but also make a larger bowl size GNLW553 with a bowl size of 22 inches. The equipment can be used to process water-based mud, oil-based mud systems, dewatering and recovery of barite. This device also has some great features: it is VFD controlled and offers operators a variety of solutions to adapt to changing field operations.

This is a basic introduction to the large bowl type decanter centrifuge 553. I hope it will be useful to you. We will do our best to help your business succeed. Welcome to www.gnsolidsamerica.com and send your questions to USA@gnsolidscontrol.com

GN Solids Control is a comprehensive company which specializes in manufacturing solid control equipment and system. Since its establishment in 2007, it always focused on the quality and reliability, and how to help the customers save more money. And among all the solid control equipment, there are 3 star products that have been proved to be more rugged, durable and reliable, they are: shale shaker, decanter centrifuge and cutting dryer.

Today I want to talk about one of our best seller—-363 decant centrifuges. Its bowl diameter is 360mm which equals to 14 inch, and it is one of the most popular sizes centrifuges used in Oil and Gas industry. More and more drilling companies started to outsource the mud cleaning services to mud service company, and centrifuge technology is the newest intervention. All the configuration is high standard which can meet most of the customer’s requirement. The bowl material is made of duplex SS 2205/ SS 2304, the screw conveyor material is made of SS 304/ SS 315 and then the surface is protected by the tungsten carbide tiles which is more endurable and reliable, and it can save customer’s money both in operation and maintenance. And the solid discharge port is also used the tungsten carbide inserts. The bearing is still used the world famous SKF. The FHD system is VISCOTHERM full hydraulic drive. The electrical control system is smart PLC control. And the coating is used the Cosco & Kansai Zinc Rich Epoxy Coating. The equipment can be used in extreme high temperature environment with heavy mud situation. And the decanter is designed and assembled on a skid, which makes it easier to move and save time and cost for transportation. 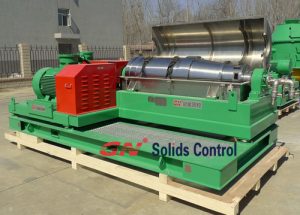