GN solid control is the most the most cutting-edge technology, solid control and drilling waste management equipment manufacturer in China, which produces the mud centrifuge has been the largest oil giant enterprises of domestic and international several full approval. In the just-concluded 2016 CIPPE oil show, crown can solids control the display of the centrifuge series, series of mm small convertible centrifuge from 220 to 550 mm of big drum centrifuge, lined up at the scene of the exhibition, has made a lot of audience attention and end users.

Especially GNLW36 centrifuge model, both in the appearance of the old version and the new design was shown in the CIPPE 2016 booths, so what is the difference between GNLW363 decanter centrifuge is a new generation?The following simple statements.
1, the first generation of GNLW363, originally designed for 360 mm horizontal spiral sedimentation centrifuge, one will have two motor is a main auxiliary, respectively installed on both ends of the centrifuge.Though, is the highest level of materials, the design concept of the centrifuge is basically the same with other domestic counterparts of the old.
2, the second generation GNLW363B, more international, with the crown to solid control has been the product sales in many countries and regions of the world, as well as the champions league to the product design is becoming more and more internationalized, GNLW363B horizontal screw centrifuge before the two motor position has a into one end is at each end of the two, mainly is to increase the operator have more space and centrifuges operating characteristics of easy to maintain, stable operation. 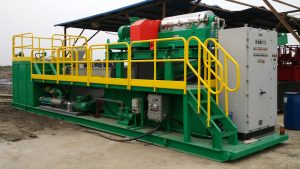 3, the third generation GNLW363C sedimentation centrifuge, in addition to the basic drilling mud solid control can also be used for oilfield waste pulp processing, it is similar to GNLW363B, two motor on one side.But on the other details GNLW363C also has a better update on structure, structure, based on the B version upgrade C version of the centrifuge and been used in many fields.Such as sludge separation, flocculation and dewatering unit, waste pulp processing, etc., with the user feedback, after upgrade C version of the centrifuge in use process compared to B version, processing capacity increased by 50%, continuity of operations, rugged conditions objection to adapt.
4, the fourth generation of GNLW363D, the inside of the design and GNLW363C are similar, but the outlook is completely different, because the structure is higher than C version is more compact, the stability, its total weight is reduced by 30%, is advantageous for the urgent needs air