Where is the drilling mud used, where is
the need for mud cleaning and recollecting unit. Starting from solids
control system for oil and gas drilling, Hebei GN Solids Control Co.,
Ltd has extend its product line to mud cleaning unit for other kinds of
drilling such as HDD, CBM water well drilling, geothermal drilling, tunneling
and bored piling. Unit now, over 30 sets of mud cleaning unit are delivered to
Australia and New Zealand for HDD trenchless project. So what is HDD drilling?

The full name for HDD is Horizontal
Directional Drilling, commonly known as directional boring with trenchless
method to install underground pipes, conduits and cables in a shallow arc along
a prescribed bore path by using a surface-launched drilling rig, with minimal
impact on the surrounding area. When the trenching or excavating can’t be
carried out because of the environmental protection to the landscapes, road and
river, the HDD is the used. Installation lengths up to 2000 m have
been completed, and diameters up to 1200 mm have been installed in
shorter runs. While when there are voids in the rock or incomplete layers of
rock, directional boring is not practical.

In the mud cleaning system for HDD, there are always 2 or 3 stages
treating machine with a mud mixing device. The first stage treatment equipment
is shale shaker which removes coarse solids out; the second stage treatment
equipment is 10’’ desander cyclone to separate
solids over 40 microns; the third stage treatment equipment is 4’’ desilter cyclone to separate solids over 25 microns. After
the treatment, the clean mud will be added some chemicals and mixed for usage.
Later, GN will bring its 350 gpm mud system to attend a show in Australia. Besides
350 gpm, GN has 200gpm, 500gpm, 800gpm, 1000gpm standard models. 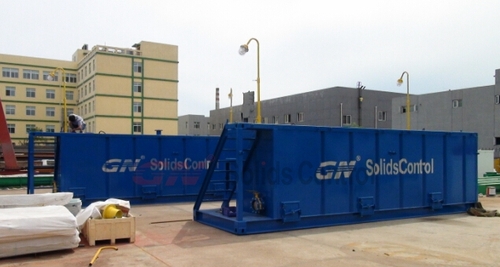 Why A Mud Cleaning System Wil Be Required For Drilling Rig?